Benefits of Training in the Sand for Indoor Players

Why should indoor players play beach?

Check out this video from the Art of Coaching about why indoor players should play beach! 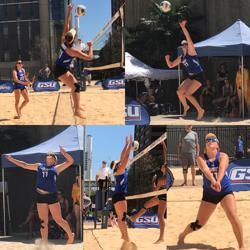 Do you want to become a more complete volleyball player? Would you like to be a better passer? Develop better ball control? Improve your defense? Become a more effective and dynamic attacker? Do you want to return to the gym in the fall moving faster, jumping higher and playing with greater agility than you ever did before? If any of these results sound good to you then you should play and train for beach volleyball.

Top coaches agree – in fact nearly every reputable collegiate coach in the country agrees - that beach volleyball is one of the best training methods known for improving your indoor performance – and it’s healthy and fun too!

It’s easier to take your outdoor skills in to the gym than to bring your indoor skills outside. Simple reason . Beach volleyball forces you to h ave all the skills . That’s why I think it’s a good idea for indoor players to play on the beach . . . . Learning those skills can only help improve a player’s in door performance. All my years playing on the beach as a kid certainly helped my indoor game. If nothing else, a player’s quickness and jump will be increased by playing on soft sand. Karch Kiraly, Beach Volleyball, 13-14 (1999).

The beach game is GREAT for improving your indoors kills/game. Whatever your weaknesses are, you get to work on them a ton . Unlike the 6 person game, you touch the ball in every rally, and with just two of you covering the court, you learn to read and anticipate much better. Dealing with the sun and wind helps you be more adaptable. Player height is less important outdoors – ball control and skill is more important. . . . Most top level coaches encourage their players to play as much as they can on the  beach . . . .” John Kessel, USA Volleyball Director of Education , Grassroots , Disabled & Beach Volleyball.

Why is the beach game so effective in improving indoor performance? Mainly because you touch the ball on every play and play in difficult sun, sand and wind conditions that force you to learn good ball control.

I’ve always told my players to play in games at the beach during the off season . It helps in so many ways. First, there are fewer [players ] around that can bail out your mistakes . Playing at the beach works your ball control skills . It seems it’s always the beach player who steps in from the back row to set the ball after one of those inspirational digs by the setter. Those transition plays win matches . The sand also helps your speed and agility. In doors you’ll expand your digging range and be quicker in pursuit of balls . A [beach player] can do it all out there – hit, set, block and coaches love to have those types of athletes.

“We feel there are many advantages to training in the sand and we have gone as far as building an in door sand court at Nebraska . Not only can [the players ] play on the sand, but we can train them there as well.”

So if you play indoor volleyball and want to dramatically improve your game, learn, practice and play beach volleyball. It’s effective, healthy and fun!